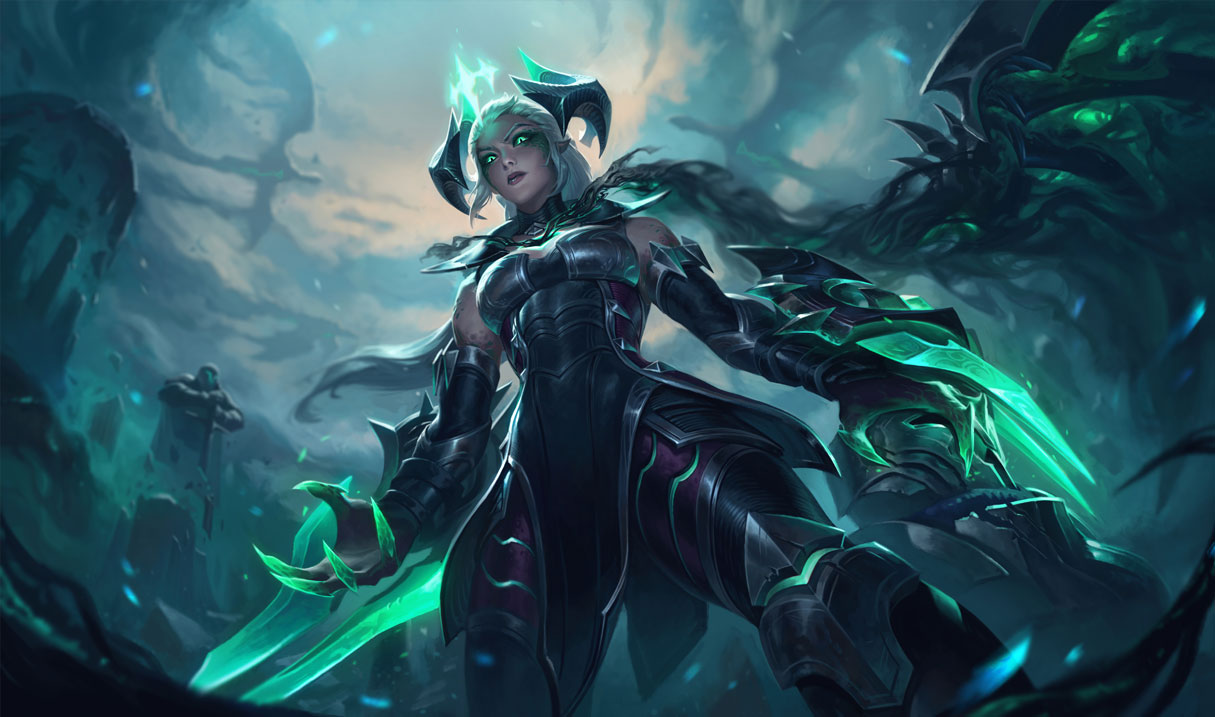 After the release of the new Warden & Marauder skins, League of Legends will welcome 6 brand new skins in the Ruined and Shan Hai line. 6 champions will get those skins, including Nautilus and Cho’gath which haven’t seen a skin in a while. Also, Shyvana, which was the only champion to not get a skin in the last two years is getting the most intriguing skin in her gallery yet.

Take a look at all the upcoming Ruined and Shan Hai skins that will release in League of Legends in the next few weeks.

“A showman no matter the circumstance, Draven challenged Viego to a duel that the Glorious Executioner immediately lost, resulting in his ruination. Unlike his ruined brethren, little has changed about Draven save for a white shock hair on his head and a slightly more vicious personality than usual.”

“Surviving the initial ruination of Ionia, Karma is ultimately lost during a second one led by Viego himself. With the Spirit of Ionia itself removed from the continent, the Ionian people must band together to save one another, even as Karma twists the souls of millions to a new, horrific purpose.”

“Shyvana’s ruination brings a newfound darkness, as well as clarity. Turning swiftly against Demacia for its persecution of magic, and sinking into her more draconic emotions, she appears as an avenging beast of old, ready to topple Demacia for its ignorance.”

“A mythical, titanic beast painted within the mysterious Shan Hai Scrolls, whose gluttony resulted in eternal karmic punishment, Cho’gath has seized upon the Scrolls’ connection to the multiverse and plans to devour both his own world and then all others.”

“A guardian who helped seal the mad god Jhin within a holy waterfall, as depicted within the mysterious painting known as the Shan Hai Scrolls. Over the millenia, Jhin has whispered of power, freedom, and true godhood to Nautilus, until he finally released him. Now twisted with anger, Nautilus’s rivers run not with water, but molten magma.”

“A kindly god of the Shan Hai Scrolls who remembers her counterpart, Jhin, from before he succumbed to madness, Neeko believes she can return Jhin to the side of good before the painting’s magic fades and doom befalls the multiverse, but she knows such an expenditure of power may destroy her in the process.”
Sources: [email protected], SkinSpotlights
RELATED:  Latest Teamfight Tactics Patch Notes - Abomination Buff Incoming
Related Topics:FeaturedLeague of Legendsruinedshan haiskins
Up Next

How to Fix Unexpected Login Error in League of Legends